Sigrdrífa is a shieldmaiden. She is a Norse warrior in search for battle and glory. She is inspired by the valkyrs of myth, those women warriors who searched the battlefields for the slain and worthy to enter Valhalla, and join Odin’s army, the Einheriar.

I think my fascination with the valkyrs stems directly from Richard Wagner’s magnificent theme from his opera Die Wälkure. You know the theme, the one that shows up in Coppola’s Apocalypse Now, or in countless other movies. The opera version, containing the singing of the valkyrs with their “hoyotohos” battlecries, is even grander than the “mainstream” version most people have heard. This is music that evokes a thousand images and feeds the imagination. It’s music that makes you want to write about it.

So here I am, writing about it.

I still do not know exactly what story will come out of it, but I can show you one image that has come out of it; here’s José Vega’s finished cover artwork: 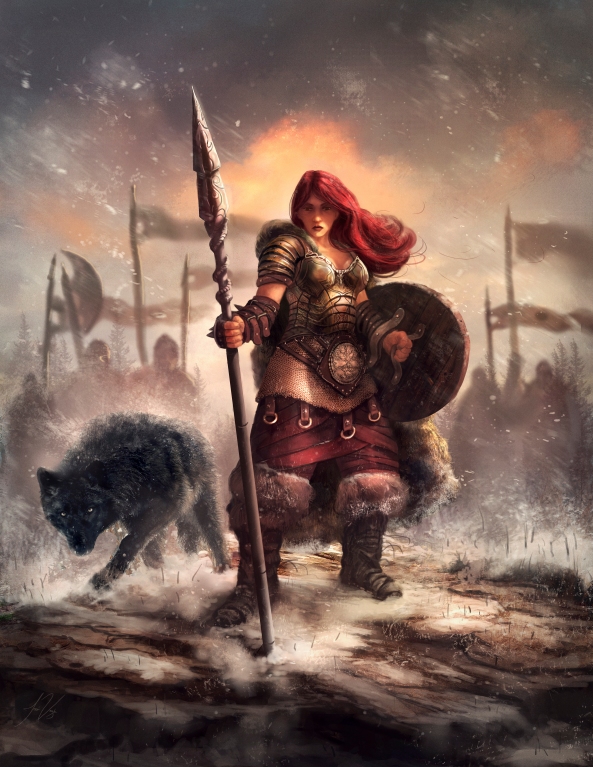 For more on José Vega’s art you can visit his webpage below.

Back in January, when I posted the official announcement for the Sigrdrífa novel, I included the first sketches for the character drawn by artist José Vega. Since then the character has been developed and the cover finished. That final version won’t be released yet (after all, there is still plenty of time before the actual novel is released), but I will present here part of the progress, plus a short interview with José.

Q: What got you into art?

A: Well I was not the typical artist who has been drawing and painting since being a kid. I got introduced to drawing in senior year by a friend and we used to redraw anime drawings back in the day when DBZ was popular. I decided to go to the Art Institute of Fort Lauderdale where I got exposed to different types and realms or “art” from Animation, to 2D Illustration, traditional painting and 3D. I got my major in Media Arts and Animation and started working as a 3D Visualization Artist doing architecture and Interior Design. I was more into the 3D world building models due to my work and because it was a more technical approach, however I was always a gamer. I loved games and I always liked to see “The art of________ ” of the games that I liked and the more I looked at those books the more I got into the pre-production process of making games. So after a few years I lost my job due to the recession, moved around the states till I ended up back in my island (Puerto Rico) where I grew up and after a year of having digital painting as a hobby and doing it more and more I decided to go for it. I started getting more involved in communities, forums and with other artists and my passion for 2D Digital Illustration grew to the point where I am at now. Still evolving and defining.

Q: Any particular influences on your style?

A: Well, I was always attracted to the games I played like Blizzard games, Halo, Soul Reaver, many others. But I can recall 2 incidents in specific where it influenced my art in a tremendous way. The first was when I first started getting serious about my artwork and polishing my skills to become a professional. I found out about Feng Zhu video tutorials from his school. And by that time he had about 30 episodes of small and short tutorials on different topics on Digital Painting. And I remember watching one in the morning and one at night before bed for like months, even though I had watched them already. I learned a lot and my artwork took a leap forward due to the videos. The other incident was in early 2012 where I decided to go for a month to Canada to the Imaginism Studios workshop. It was an intense and remarkable experience. It was all about Art and friends. The lessons I took about foundation, rendering, style, imagination, etc., were very, very important in creating what I am right now. It was a great experience.

Q: If you could pick a film or franchise in which to work on as art designer, which one would it be?

Ok so after thinking a lot I think it would be AWESOME for me to work in a new series for the Legacy of Kain games, Soul Reaver. It is a game series that I enjoyed a lot when it came out and it has been a while since they make a new game.

Q: What was the process behind the design of Sigrdrífa’s cover?

A: Well after reading the author’s description of an idea, usually what I do is do some research. And the first thing I look for is for a good color palette. There are a lot of ways I can go for that but after finding that then I start with more specifics like, research on armor, book covers, composition, etc. Once I have all that gathered up I start sketching, making thumbnails to play with composition and placement and look for the best possible image and design, which in my opinion is probably the hardest part because once I have that its all about rendering and spending time with the image. 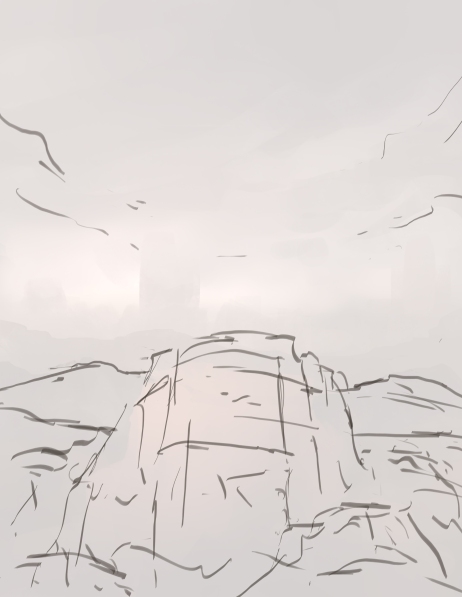 For more on José Vega’s art you can visit his webpage below.

NEXT TIME: What I have learned from reading the Völsunga Saga, Part 2